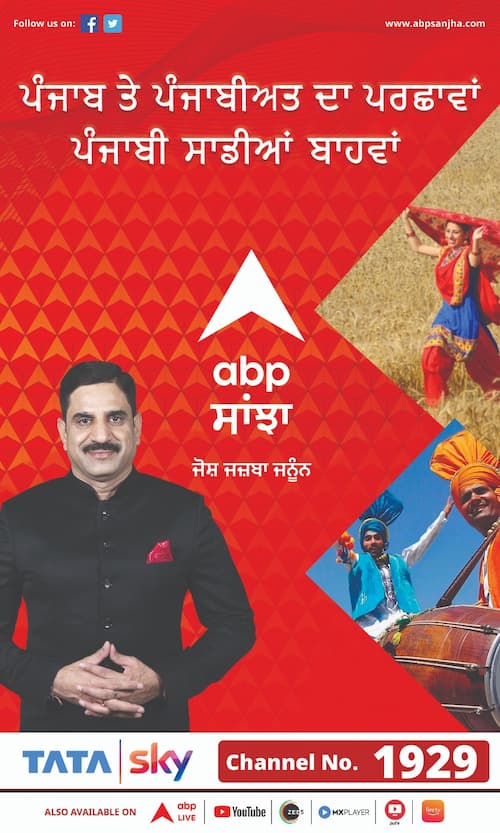 Mumbai, 19th Nov 2021: On the auspicious day of Gurupurab, ABP Sanjha has taken a huge leap with its launch on India’s leading Direct-to-Home (DTH) provider, TATA Sky. The partnership with TATA Sky will make the channel accessible to subscribers who were keen to watch ABP Sanjha on the DTH platform. It will further strengthen ABP Sanjha’s foothold among the Punjabi-speaking community spread across the world. The channel has a special focus on Punjabis and Punjabiyat.

With its in-depth coverage on issues affecting the Punjab region, ABP Sanjha has taken the lead in providing its Punjabi viewers with content that is interactive and exclusive covering political, social, economic, and sporting events. ABP Sanjha’s digital site receives 11.1 million monthly page views. Thanks to its unique content and unrivaled local news coverage. ABP Sanjha’s digital news platform also has a whopping 1.39 million subscribers on YouTube and 1.1 million likes on Facebook. These figures truly represent ABP Sanjha’s credibility and reputation among its users, as well as the platform’s superior content delivery.

Commenting on the ABP Sanjha’s debut on TATA Sky, Mr. Avinash Pandey, CEO of ABP Network, said: “Since the time we started ABP Sanjha on the internet platforms in 2014, it has garnered string of affiliations and numbers. ABP Sanjha’s, debut on Tata Sky is a big leap for a brand which already has a strong loyal base on Zee5, JIO TV, MX Player, Amazon Fire TV. ABP Sanjha also reflects the emerging trend in the industry, where the products are launched into the streaming platforms first and then go onto cable and satellite platforms. We at the ABP Network started this trend and we are happy that many in the industry are following it now.”

ABP Sanjha boasts of strong creative and programming teams that work in tandem with popular on-ground journalists to provide viewers with an immersive experience. This was evident from the recently held Shikhar Sammelan in Chandigarh on 4th October, which was attended by political heavyweights across the political spectrum in Punjab. The event was a huge success as it captured the current shift in political leadership and its ramification in Punjab, which gave spectators a clear image of political realignments ahead of the elections next year.

ABP Sanjha’s debut on TATA Sky is coming ahead of next year’s assembly elections in Punjab, the channel is bound to attract higher viewership from the new set of audiences. The channel has a strong program list in the pipeline, keeping its coverage rooted on the ground, while highlighting pertinent issues, with programmes such as Chona da Chulla Chaunka, Sanjhi Sath Siyasi Sach, Kaun Banuga CM, and Tuhada Halka Tuhada Leader, Kya Hua Tera Wada.

Through this line-up, the channel will deep dive into all facets of the upcoming Punjab elections, from focusing on issues related to rural women and the evolving politics at the grass-root level in village politics to assessing the best possible CM candidate. Through Kya Hua Tera Wada, ABP Sanjha plans to test public perception on the work done by the current Government vis-à-vis their election manifesto in 2017, and with Tuhada Halka Tuhada Leader, an interactive show with the representatives of a particular constituency assessing the report card of Ministers and MLA.

Tata Sky is the most popular paid platform in the state of Punjab alone, catering to 7 lakh homes (approx. 28-30 lakhs people) using its services. It has a 14 percent market share in the state, followed by Airtel with a 12 percent share.

An innovative media and content creation company, ABP Network is a credible voice in the broadcast & digital sphere, with a multi-language portfolio of news channels reaching 535 million individuals in India. ABP Studios, which comes under the purview of ABP Creations – the content innovation arm of the network – creates, produces, and licenses original, path-breaking content outside of news. ABP Network is a group entity of ABP, which was incorporated almost 100 years ago and continues to reign as a leading media company.