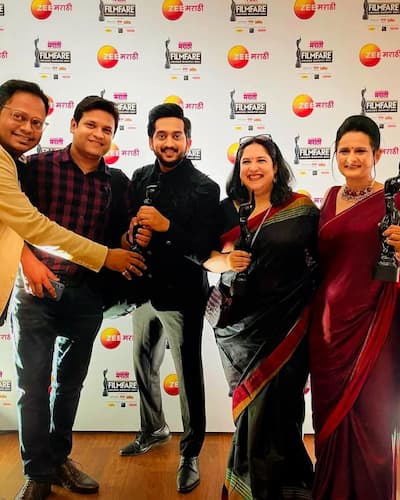 The film is a comical, touching drama of a dysfunctional ‘last united family of Pune,’ and it takes a lighthearted look at mortality. The plot of the film is squeezed into a Maruti Omni on a road trip from Pune to Pandharpur to fulfil the beloved family patriarch’s final wishes.

Commenting on the film’s success, Avinash Pandey, CEO, ABP Network, said, “This is no doubt a huge accomplishment, but I also believe this is just the beginning for our ABP Studios’ team.

That this achievement is a precursor of bigger things to come is borne out by the growth and scale that ABP Studios has been able to achieve in such a short span of time. With Karkhanisanchi Waari they have achieved the goal of effectively capturing the audiences’ imagination by sticking to their primary objective of providing stories from the heart of India.

The collective nominations across 9 different categories is a huge testament to this achievement. I am extremely proud of the team and hope that they continue to raise the bar with our upcoming projects.”

Also commenting on the magnificent success, Zufia Waris, Business Head, ABP Studios said, “We are very humbled to receive the plaudits and recognition from Marathi Filmfare. It is a great honor to receive this prestigious award for ABP Studios’ debut film.

Our filmKarkhanisanchi Waari has the unique ability to attract audiences from across the globe, whilst being inherently rooted in its storytelling. You would find yourself connected with different members of the Karkhanis family because they would oddly be familiar to yours, which in my opinion is what makes it universally liked whether someone is seeing it in Tokyo or in the interiors of Maharashtra.

At ABP studios, we are driven by our collective desire to showcase stories that are truly Indian but have the power to travel across the world.”

ABP Studios specializes in content creation and production. It falls under the purview of ABP Creations, ABP Network’s content innovation arm. With a collective experience and knowledge of India since 1922, they are a robust team of ‘multilingual and platform-agnostic storytellers’ with a demonstrated flair for creating innovative solutions for all business needs. The studio provides wide-ranging services, including IP creation, production, and co-production of fiction and non-fiction content across multiple platforms, licensing and syndication, brand solutions as well as interactive content.