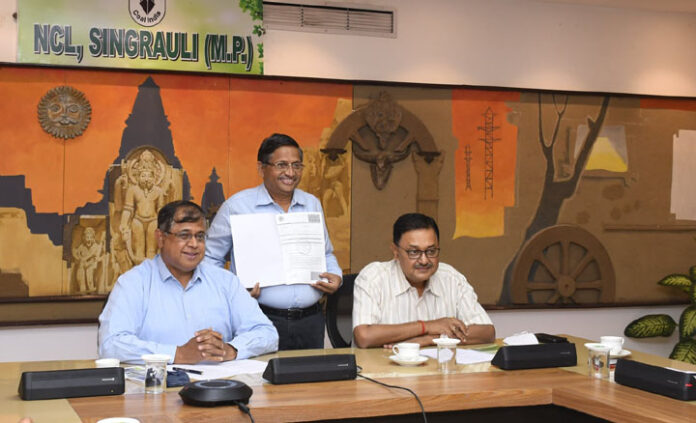 Director Technical Coal India Limited Binay Dayal congratulated CMD NCL  P K Sinha and his team and wished the best for the early completion of the project. Adding that it is the largest project in the renewal field by CIL to date, he remarked it as the historical day for CIL in green energy.

Director (Operations), NTPC  Ramesh Babu also congratulated the entire project team. While extending his full support as Project management Consultant, He hoped that more such projects will come up in near future.
Director (Technical/Operations) Dr. Anindya Sinha affirmed NCL’s commitment to becoming a Net Zero Energy company and said that this step will reduce carbon emission by about 78020 Tonnes/Annum. He apprised that this project will fulfill about one-fourth energy requirement of NCL and assured that the project will meet its expectation.
Northern Coalfields Limited is Singrauli, The energy capital of India-based Miniratna company and Subsidiary of Maharatna Coal India Limited. NCL digs 115 MT coal annually with its 10 highly mechanized open cast coal mines for the energy aspiration of the country. With an aim of captive power consumption, NCL’s 50MW power plant will foster NCL to become a net-zero company which enables it to cater 100 percent of its own power needs from renewable sources or generate its own renewable energy onsite for mining and auxiliary operation.

NCL has already started work on rooftop solar with a capacity of 3.37MW on its offices and residential complexes. NCL is likely to contribute about 280 MW in its share of Coal India Limited’s target.

Notably, Coal India Limited & NTPC Urja Pvt Limited (CNUPL) is A joint venture of CIL & NTPC incorporated with an objective of development of Coal Mine and Renewable Energy