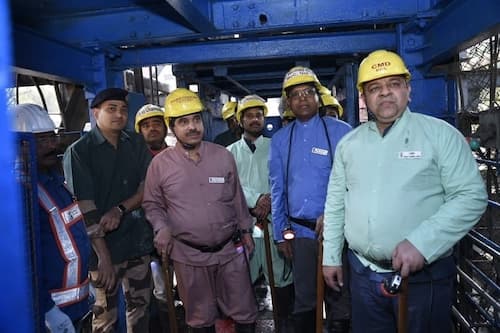 Durgapur, 24 November :  On the second day of two-day visit to Eastern Coalfields Limited today Minister of Coal, Mines and Parliamentary Affairs Pralhad Joshi visited the View Point of Sonepur Bazari Project under Sonepur Bazari Area of ECL, where he was accorded a grand welcome in a traditional manner.

He was accompanied by M. Nagaraju, Additional Secretary, Ministry of Coal, Government of India. During this time, he inspected the entire project from the View Point, as well as held a review meeting of the project with the officials and gave necessary instructions. 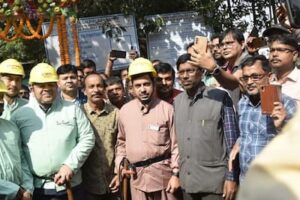 After this, the Minister of Coal also inaugurated a 12.0 MTY, SILO and CHP in Sonepur Bazari area, which will help to increase the coal loading capacity of the company as well as will also help to control environmental pollution caused by coal production and dispatch. 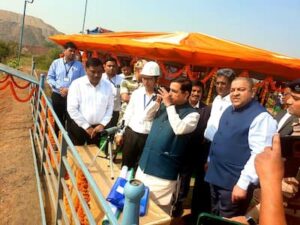 Pralhad Joshi is the first Hon’ble Coal Minister who went inside the Underground Mine of Jhanjhara Project, underground coal mine, the most coal producing underground mine of India, inspected the coal mine and encouraged the coal workers and officials.

During this time, he also dedicated the Jhanjhara Expansion Project (5.0MTY), underground coal mine to the Nation. After this, the Hon’ble Minister of Coal also planted saplings in the courtyard of Jhanjhara Project. 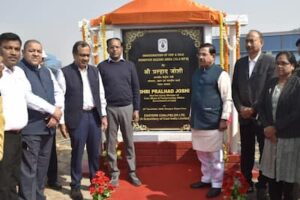 During his two-day visit to ECL Minister of Coal Pralhad Joshi stressed on achieving the 50 MT annual coal production target of ECL during 2022-23, and directed to increase the coal production and dispatch to meet the energy requirement of the country. At the conclusion of his ECL tour, he extended his best wishes for the betterment of the company. 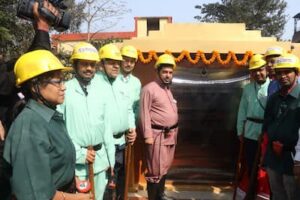 CIL’S future is strong, despite onrush of renewables: Chairman